There's a ton of history at the Texas Rangers Hall of Fame & Museum in Waco. Outside you'll find monuments like this one to George Erath a former Ranger and one of the orignal surveyors of the area. 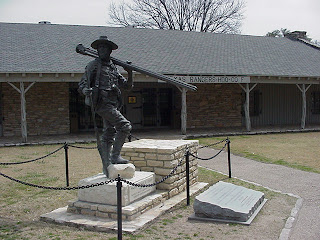 You'll also find this Historical Marker which brings us to today's "Marking Time." 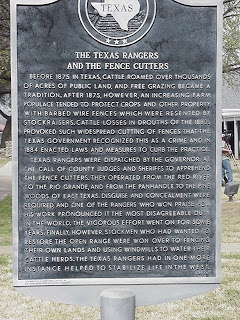 Before 1875 in Texas, cattle roamed over thousands of acres of public land, and free grazing became a tradition. After 1875, however, an increasing farm populace tended to protect crops and other property with barbed wire fences which were resented by stockraisers. Cattle losses in drouths of the 1880s provoked such widespread cutting of fences that the Texas government recognized this as a crime and in 1884 enacted laws and measures to curb the practice.
Texas Rangers were dispatched by the Governor at the call of County Judges and Sheriffs to apprehend the fence cutters. They operated from the Red River to the Rio Grande, and from the Panhandle to the Pine Woods of East Texas. Disguise and concealment were required, and one of the Rangers who won praise for his work pronounced it the most disagreeable duty in the world. The vigorous effort went on for some years. Finally, however, stockmen who had wanted to restore the open range were won over to fencing their own lands and using windmills to water their cattle herds. The Texas Rangers had in one more instance helped to stabilize life in the West.

Here's some video we shot a few years ago about the museum:

Posted by Explorer Multimedia Inc. at 7:56 AM