We Found the Best Vending Machine in the World

The Houston Museum of Natural Science has everything you want in a natural history museum.  Fossils, rocks, interactive displays, rotating exhibits...and all the dinosaurs you stare at. 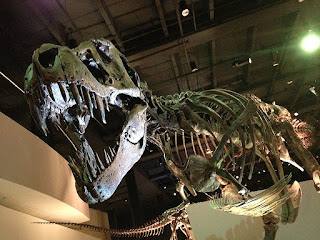 But it was when we were on our way out that we discovered something truly unique.  Near the gift shop is this unassuming vending machine: 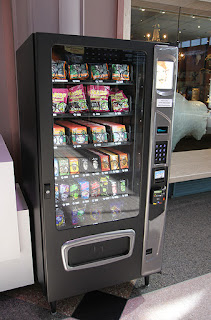 Sure, it looks like the average treat dispenser but if you take a closer look you'll see a menu of science specific snacks and borderline gross grub.  Let's start with some of the more traditional fare.  And what's more at home at a museum than dinosaurs? 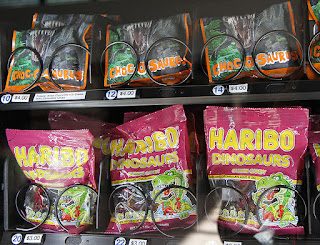 Gummi bears are replaced with Gummi Dinosaurs but the real find here is the top row.  Choc-o-saurus is a combination of two museum staples: dinosaurs and freeze dried ice cream!  It's chocolate with chocolate chips and, while eating it, you have the option to pretend like you're an astronaut or a extinct predator who loves dehydrated food. 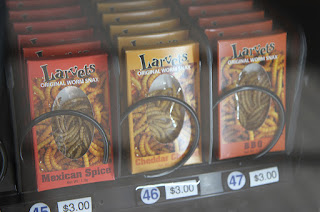 Larvets!  Wondering if these things are what they look like?  Well, here's the explanation directly from their website: "Real larva, deliciously seasoned. Offered in three flavors: BBQ, Cheddar Cheese, or Mexican Spice."  And that's not enough bugs to satisfy your appetite, then good news... 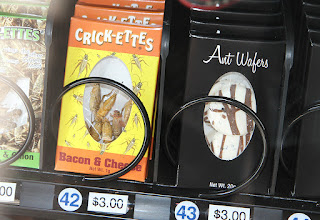 Here we've got "Crick-ettes." which are, you guessed it, real crickets.  These are Bacon & Cheese flavor but they also come in Salt N' Vinegar and Sour Cream & Onion.  And if you're still hungry for bugs, you can also grab some Ant Wafers!  It's essentially what it sounds like: "Real ants in chocolate flavored round wafers." 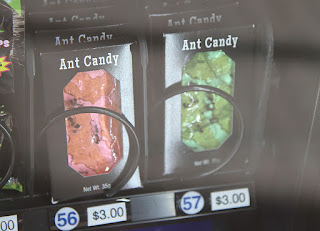 Have you ever eaten hard candy and thought to yourself, "I wish this had ants in it."  Then you should have picked #56 or #57 from this vending machine.  You get the option of either Cherry or Apple flavor, both with Black Ants of course. 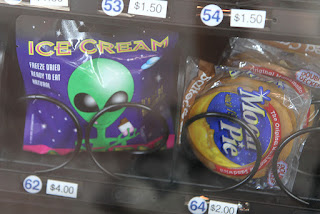 For our final selections we head to outer space for Alien Ice Cream.  This another freeze dried ice cream and is your standard Neapolitan flavor but it's either made by or eaten by Aliens.  Or maybe there's just one on the package.  Or you can have a Moon Pie!  Get it?  "Moon"

So the next time you head out to the museum, bring some change and an adventurous appetite.

Posted by Esteem Education Co. at 8:27 AM No comments: