The December issue of Rock & Gem Magazine has a review of "Oklahoma Rocks!" Check it out below: 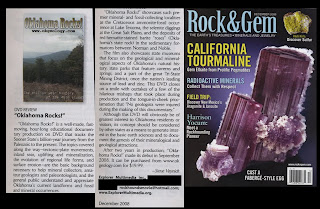 "Oklahoma Rocks!" is now available for purchase on GeologyVideo.com!
http://www.geologyvideo.com

Posted by Explorer Multimedia Inc. at 1:28 PM No comments:

On the Screen and in the Pages

Another successful screening of "Oklahoma Rocks!" was held this past weekend at the Vacant Era Film Festival in Norman at the Sooner Theatre:

Special thanks to the friendly Vacant Era staff for putting on the show. It's always nice to have a hometown screening. The theatre was directly across from James Garner Park and if Norman's favorite son had been there we think he would have loved it.

We also snagged a mention in this month's issue of Rock & Gem Magazine. Pick up a copy or check it out below: 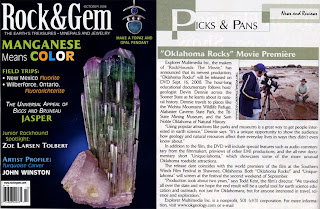 Posted by Explorer Multimedia Inc. at 10:01 AM No comments:

Missed the screening? Shame on you...but you're in luck. Announcing the next screening of "Oklahoma Rocks!" - The Vacant Era Film Festvial in Norman, OK

Oklahoma Rocks! will screen along with Unique-lahoma at the Sooner Theatre in Norman, OK Sunday at noon on October 5th.

Still not enough? Well, more good news: Now you can buy your own DVD copy of "Oklahoma Rocks!" on GeologyVideo.com:

So now you officially have no excuse for not having seen the movie.

Posted by Explorer Multimedia Inc. at 10:19 AM No comments:

The "Oklahoma Rocks!" World Premiere Hype flows like wine now...especially with articles like this from the Shawnee Sun:

The article calls the film "One of the main attractions at the festival..." We are also nominated for "Best Okie Feature." Cool.

Posted by Explorer Multimedia Inc. at 7:51 AM No comments:

Now is your chance to see the most anticipated Oklahoma geology documentary of the year!

You can also see "Unique-lahoma" at Southern Winds!

Posted by Explorer Multimedia Inc. at 10:08 AM No comments:

The Black Hills in South Dakota. Known for its rocks and precious metals. One big chunk of rock in particular gets most of the attention: 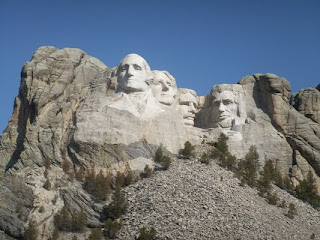 But if Mount Rushmore is the appetizer then the area's rocky main course is in the form various colored, polished stones. You remember going on vacation as a kid and seeing the old prospector stations where you can pick out your own rocks. If they could fit in the tiny pouch then they could be yours (for a semi-reasonable price).

Well those things are back in a big way. Or maybe the never left. But in our estimation, every 20 square feet in South Dakota is required by law to have one. See for yourself: 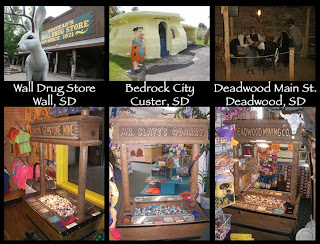 These things are everywhere. The rocks themselves are fairly worthless but they're pretty and anything that gets people excited about rocks can't be bad.

Just about every tourist attraction also offers the standard sluicing experience too. There are ample opportunities to turn something like this: 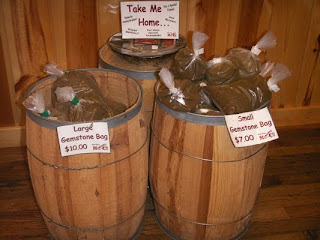 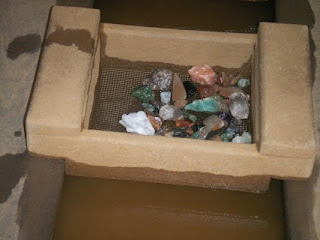 Sure, it's not the hardcore, down and dirty rockhounding that veteran gem & mineral collectors are so accustomed to. But for an introduction to the hobby, it's not bad.

So if you are looking for rocks, They're all in South Dakota. Well...maybe not all of them...but, man, those things are everywhere.

Check out the preview:

Posted by Explorer Multimedia Inc. at 11:51 AM No comments:

Video interview of Devin by NewsOK.com

Posted by Explorer Multimedia Inc. at 7:57 AM No comments:

Posted by Explorer Multimedia Inc. at 11:36 AM No comments:

Posted by Explorer Multimedia Inc. at 9:20 AM No comments:

The problem with a necessary evil is that it is...necessary. Take for example: making a documentary about the geology of Oklahoma (or filmmaking of any kind). Once you review your "finished" movie, you tend to notice there are a few things missing.

And thus the necessary evil: reshoots.

So off we went. First stop: The Oklahoma Oil Museum in Seminole, Oklahoma.

Places like this are what we call a "Mom & Pop" Museum as they tend to be labors of love that are operated by a handful of enthusiastic and dedicated volunteers. This one was actually much bigger and impressive than we thought it would be. Plenty of antique drilling equipment is on display behind the museum. For example: giant honkin' drill bits. And since none of the "Devin does something funny while posing next a giant honkin' drill bit" pictures turned out very well, here's the regular one:

And if you think that's surprising then check out how surprised this mannequin looks while we were shooting inside:

The museum was nice but it wasn't our main priority. Our main objective? Coal. There's nothing quite like spending a weekend driving all over southeastern Oklahoma looking for anything coal related that might make for a good visual. Eventually we found enough stuff...like the Coal Miners Memorial in McAlester:

That's all fine and good but man cannot live on coal alone. For decades the miners have been aware of an even greater natural resource that comes from this area: Beer!

Legend has it that the Choctaw Indians gave their beer brewing secrets to Italian immigrants in the early 20th century. In Krebs, OK "Choc Beer" is brewed and served at Pete's Place restaurant. Choc beer variations include "Miner Mishap" (get it?) and "Miner's Light" (get it?). Find them online here: http://www.petes.org/

I'll forego the full blown review of the place that we had planned and just bottom line it:

How good? Well, shake hands with the 30 oz. Sirloin Steak for Two:

Now that you guys are acquainted I can let you know that we are already thinking of excuses for getting more coal footage.

Posted by Explorer Multimedia Inc. at 10:20 AM No comments:

Sit back and enjoy the musical stylings of geologist Devin Dennie.

Posted by Explorer Multimedia Inc. at 2:34 PM No comments:

We are now making selected clips from our vast stock footage library available for purchase on RevoStock.com

We've only got a few clips up so far but we will be adding more on a weekly basis. We're also taking requests. Need footage of a certain mountain, cave, fossil, or mineral specimen? Let us know.

And for those of you who have absolutely no interest in stock footage we now present a special musical performance of "Free Love on the FreeLove Freeway" by David Brent:

Posted by Explorer Multimedia Inc. at 10:57 AM No comments:

Announcing the return of "North Texas Explorer!" (Yes, we're going back to the well.)

Click below to find us on iTunes (This will open up your iTunes software on your computer):

Don't forget to subscribe and you will get a regular dose of museums, parks, zoos, science and history in and around North Texas and beyond!

Posted by Explorer Multimedia Inc. at 9:52 AM No comments:

All right folks, here's the trailer for "Unique-lahoma," the companion piece to "Oklahoma Rocks!"

Posted by Explorer Multimedia Inc. at 12:34 PM No comments:

"Oklahoma Rocks!" is really, really, really finished...sort of. We are at the point where the work is done and is being reviewed and as long as everything is factually correct then we're putting a fork in it.

So now is the time when we rest, ever so slightly, on our laurels and enjoy the luxurious stress-free time between the end of one film and the beginning of another.

Ok, that's it. Time's up. Announcing:

What is "Unique-lahoma" you ask? Well, you know how when you're shooting a documentary about the geology of Oklahoma and you keep running into really neat roadside attractions? And you can't seem to fit them all into the geology documentary no matter hard you try to crowbar them in? Of course you do, who wouldn't?

Well, the end result is a documentary short that makes an extra special DVD extra (and film festival submission). We already had most of it shot but there were a few more things we couldn't help but add. First off was an interview with Deborah Bouziden who co-wrote:

"Off the Beaten Path: Oklahoma"

She braved the cold weather to give us her insights into some of the places and things that we will be covering in "Unique-lahoma."

One of those things is right behind her in that picture: "Pops"

Pops is more than just a gas station. It's a soda mecca with over 400 different types of soda to choose from. That's 395 more than I knew about.

It's right on Route 66 in Arcadia, OK. Sure, we got our kicks while mother-roading it but that's not new territory for us. But what was new territory was enjoying a "Route 66 Cream Soda" while actually on Route 66. Devin demonstrates:

If that makes you thirsty for even more wacky roadside shenanigans then you should see what else is in the movie. And hopefully you will...soon.

Posted by Explorer Multimedia Inc. at 2:13 PM No comments:

There's an article about "Oklahoma Rocks!" in the new issue of the AAPG's (American Association of Petroleum Geologists) EXPLORER Magazine.

Give it a read and let us know what you think.

Posted by Explorer Multimedia Inc. at 2:03 PM No comments:

Life is all about regret.  For example, I regret that I am still waiting for some graphics to be made so that we can finish "Oklahoma Rocks!"  But that's not the only thing that's been keeping me tossing and turning lately.

Some might remember that in a past blog I lamented the fact that while shooting in the area (for "Oklahoma Rocks!...coming soon!  I swear!), we were unable to stop in Durant, OK to get footage of their "World's Largest Peanut."

Now for most people that would have been that.  But the free time that comes with waiting for graphics (Finish my @!$%&ing graphics already!!  You know who you are!) is a harsh bedfellow on a boring Saturday morning.  So I decided my peanut itch must be scratched.

Before we go any further, Durant's dirty little secret needs to be addressed.  No, their peanut is actually not the "World's Largest."  A larger legume looms over the people of Ashburn, GA.  However I submit that there is a certain small town charm inherent in out-and-out lying about a minor accomplishment and/or tourist attraction.  (Although in Durant's defense they probably didn't know about Ashburn when they made their peanut monument.)

Now in my opinion one of the best things a small town can have is a theme.  And while Durant doesn't have a series of peanut street vendors or peanut themed muffler shops, what they do have is this:

These guys know how to celebrate the peanut.  Peanut brittle (which I also got), peanut butter, peanut candy...George Washington Carver would approve.

Sure they have the standard candies, sauces and jalapeno relishes (somebody buys it...I've just never met them) but here, the peanut is king.  And pity anyone who points out that it is neither a "pea" nor a "nut."

I'd like to say I learned a lot from the experience but I mostly just learned how to shell and eat peanuts while driving 70 mph down the highway with a minimum of collateral damage.  That'll just have to be enough.

Posted by Explorer Multimedia Inc. at 8:15 AM No comments: