In our travels we are constantly running across State Historical Markers. The typical reaction by most travelers is to ignore these points of posterity in an effort to get where they are going. But the focus of each of the markers is to remind weary road goers of important people, places and events of the past. And as the expression goes, those who forget history are doomed to repeat it...

To that end, we are introducing a new feature on the blog: "Marking Time." Each Marking Time entry will focus on one historical marker. While we won't go terribly in depth with the history of the marker, we will show off it's location and hopefully remind roadtrippers to take a look around on their next journey and possibly appreciate what a great learning tool the open road can be.

Our first Marking Time entry is the B.W.J. Wofford Home: 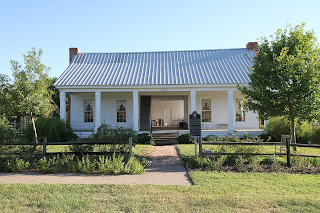 The home was relocated to the East Texas Arboretum in Athens, TX. 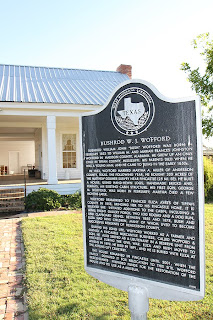 Bushrod W. J. Wofford Bushrod William John "Bush" Wofford was born in February 1832 to William M. and Mariah Frances Johnston Wofford in Madison County, Alabama. He grew up an only child in Tippah County, Mississippi. His parents died when he was a young man, and he came to Texas in the early 1850s.
In 1852, Wofford married Martha A. Miller of Anderson County, Texas. The following year, he bought 320 acres of the Matthew Goliher Survey near Fincastle (25 mi. Se). He built a house, using hand-hewn logs, handmade bricks and, perhaps, an existing cabin structure. His first son, George M. Wofford, was born in February; Martha died a few months later.
Wofford remarried to Frances Eliza Ayres of Tippah County in 1855, bringing her to his Fincastle home. It is believed she initiated additions to the cabin, including a long, front gallery porch, two log rooms and a dog run, and clapboard siding. Between 1855 and 1878, Bush and Eliza had nine children, many of whom lived to become successful residents of Henderson County.
During his long life, Wofford worked as a farmer and owned a Fincastle mercantile business, called Wofford & Son. He also served as a lieutenant in a reserve unit from Fincastle during the Civil War. Eliza and Bush moved to Athens in 1890. He died in 1891, and he is buried with Eliza at the Athens City Cemetery.
The house remained in Fincastle until 2001, when the family donated it for relocation to this site. Wofford descendants provided funds for the restoration of the house and its use as a museum. 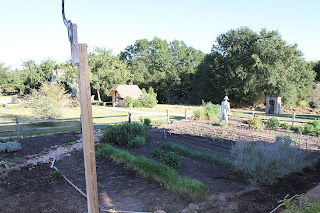 Outside the house is a recreation of the family's garden which is enjoyed by visitors to the arboretum. 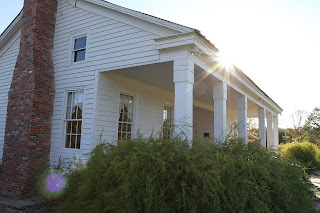 While we won't be able to catalog every historical marker (there are tons of 'em) we will feature as many as we can and look forward to the journey.
Posted by Explorer Multimedia Inc. at 11:37 AM