Today's "Marking Time" entry take us to Eastland, TX where we get a double-shot of historical markers: 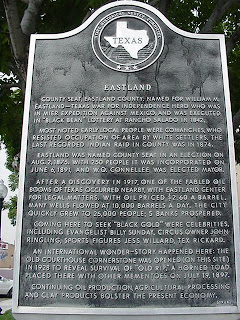 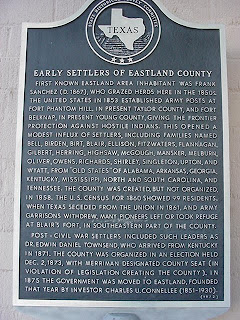 The one of the left reads:

"County seat, Eastland County. Named for William M. Eastland--Texas War for Independence hero who was in Mier Expedition against Mexico, and was executed in "Black Bean" lottery at Rancho Salado in 1842.
Most noted early local people were Comanches, who resisted occupation of area by white settlers. The last recorded Indian raid in county was in 1874.
Eastland was named county seat in an election on Aug. 2, 1875. With 250 people it was incorporated on June 6, 1891, and W.Q. Connellee was elected as mayor.
After a discovery in 1917, one of the fabled oil booms of Texas occurred nearby, with Eastland center for legal matters. With oil priced $2.60 a barrel, many wells flowed at 10,000 barrels a day. The city quickly grew to 25,000 people; 5 banks prospered.
Coming here to seek "black gold" were celebrities, including evangelist Billy Sunday, circus owner John Ringling, sports figures Jess Willard, Tex Rickard.
An international wonder-story happened here: the old courthouse cornerstone was opened (on this site) in 1928 to reveal survival of "Old Rip", a horned toad placed there with other mementoes on July 19, 1897.
Continuing oil production, agricultural processing and clay products bolster the present economy. "

And the one on the right:

"First known Eastland area inhabitant was Frank Sanchez (d. 1867), who grazed herds here in the 1850s. The United States in 1853 established Army posts at Fort Phantom Hill, in present Taylor County, and Fort Belknap, in present Young County, giving the frontier protection against hostile Indians. This opened a modest influx of settlers, including families named Bell, Birden, Birt, Blair, Ellison, Fitzwaters, Flannagan, Gilbert, Herring, Highsaw, McGough, Mansker, Melburn, Oliver, Owens, Richards, Shirley, Singleton, Upton, and Wyatt, from "old states" of Alabama, Arkansas, Georgia, Kentucky, Mississippi, North and South Carolina, and Tennessee. The county was created, but not organized, in 1858. The U.S. Census for 1860 showed 99 residents. When Texas seceded from the Union in 1861, and Army garrisons withdrew, many pioneers left or took refuge at Blair's Fort, in southeastern part of the county.
Post-Civil War settlers included such leaders as Dr. Edwin Daniel Townsend, who arrived from Kentucky in 1871. The county was organized in an election held Dec. 2, 1873, with Merriman designated county seat (in violation of legislation creating the county). In 1875 the government was moved to Eastland, founded that year by investor Charles U. Connellee (1851-1930)."

Eastland has few interesting claims to fame like the 6-ft. x 10-ft. mural made from over 11,000 stamps at the post office: 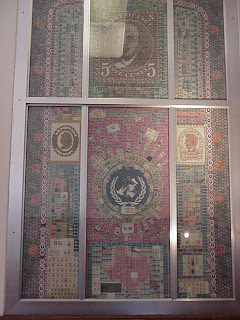 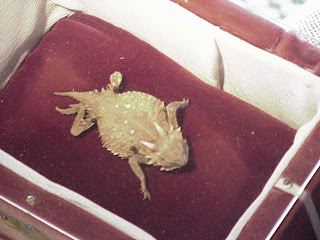 Old Rip is a local legend and his coffin resides in the Eastland County Courthouse where people come from all over the world to pay their respects. (He was also the subject of one of our documentaries).

Posted by Explorer Multimedia Inc. at 11:32 AM