Stuff We Saw in Charlotte Part 6 - Light Show (With Video)

Not far from the Green is the Duke Energy Center.  It looks like any other building in the daytime: 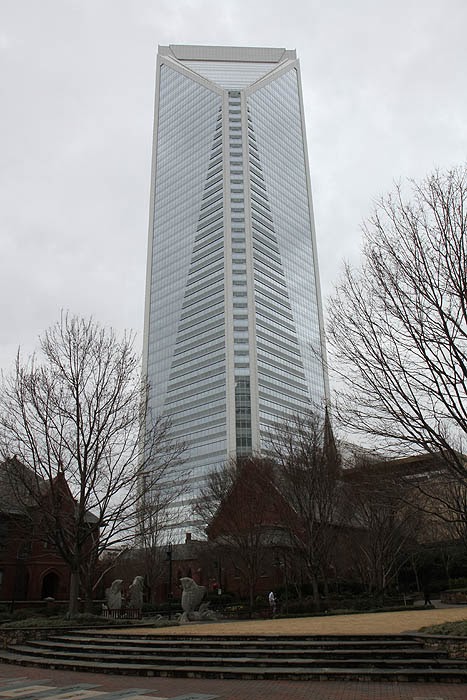 But at night 45,730 LED lights light it up in different colors. The colors are meant to raise awareness of local groups and events. At the top of each hour there's a light show at the top. Here's a look:

Posted by Esteem Education Co. at 9:18 AM No comments:

Earth science is clearly in our wheelhouse.  Many people don't realize how much ground that covers.  But if you look, you'll be able to find it.  Where did we find it in Charlotte?  We struck gold at our next stop, The Wells Fargo History Museum. 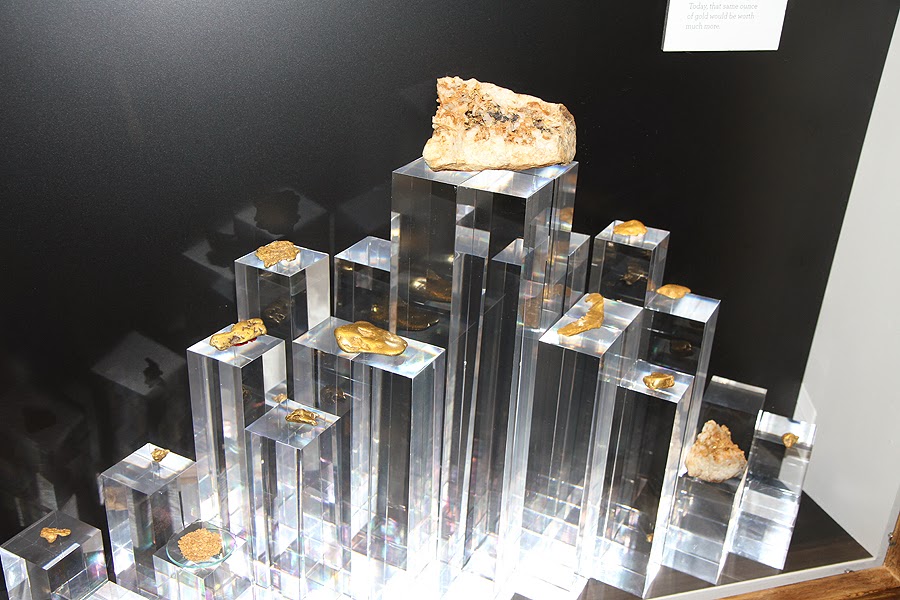 These samples are similar to the types of gold that 19th century prospectors sold to Wells Fargo.  According to the display gold sold for about $17 an ounce.  Several creative exhibits gave more information about gold including its infamous heaviness: 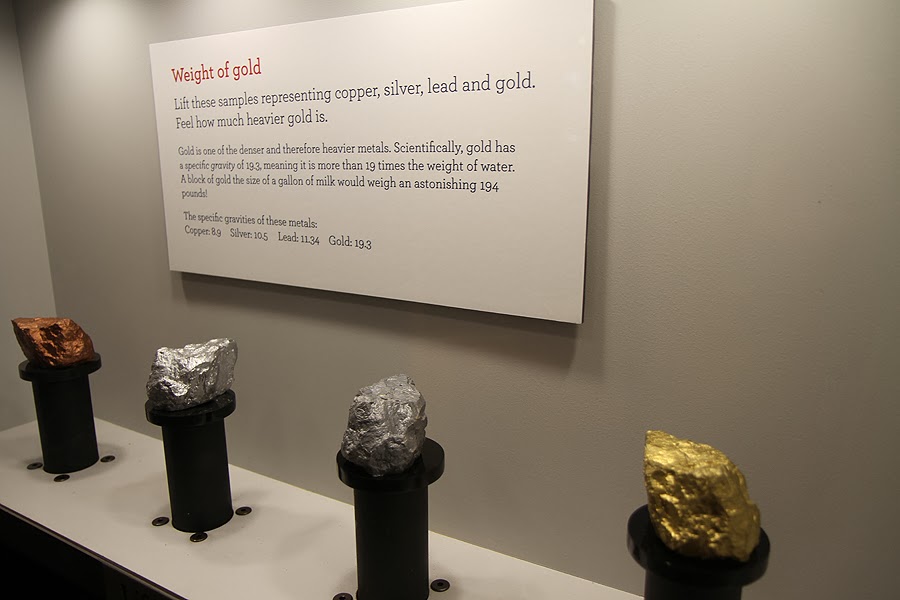 Visitors can lift up each sample from the bottom to get a comparative feel of heftiness compared to copper, silver and lead.  Which leads to the old time processing methods used to get the gold into something more recognizable: 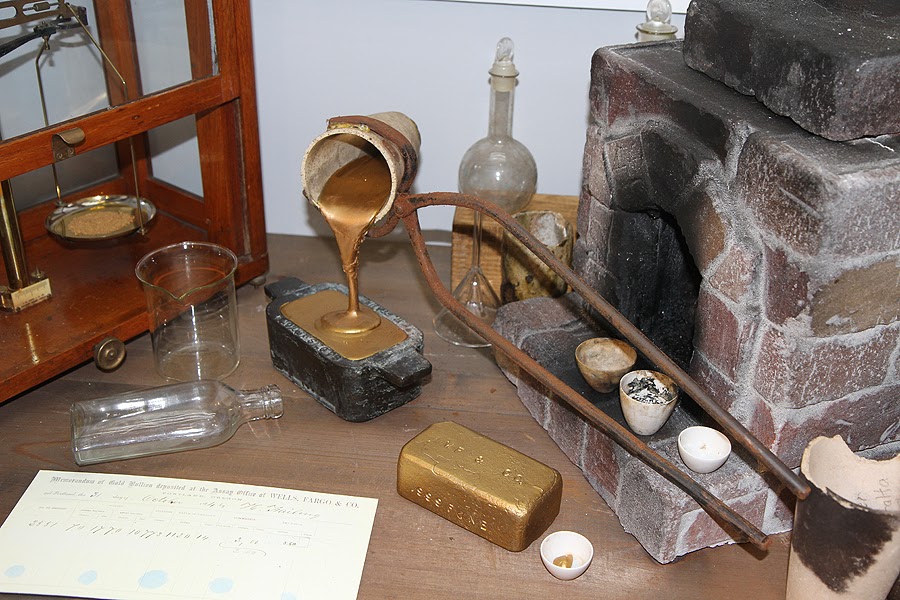 So we see the final product to the delight of pirates and treasure hunters everywhere:

Posted by Esteem Education Co. at 10:23 AM No comments:

Exploration can be strenuous.  It takes a lot of energy to walk the streets of Charlotte with nothing but a camera and a healthy dose of curiosity.  Refueling is essential as thoughts turn from the sights to the flavors of the Queen City.  Local eateries vie for the attention of weary travelers like us with an array of aromas competing for the lunchtime dollar.

But nothing beats the best.  And according to this neon (the best source of info) we found the best: 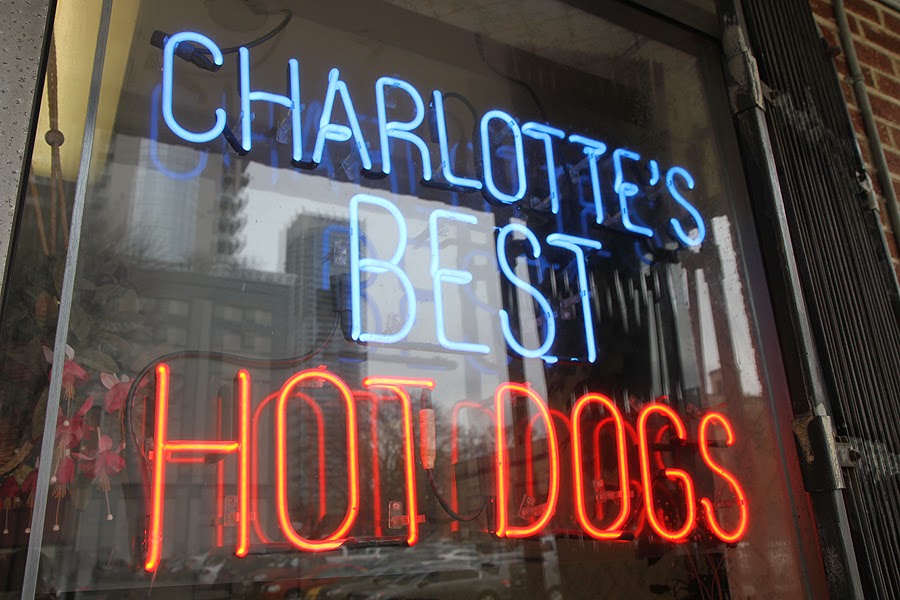 Green's Lunch is Charlotte's Oldest restaurant.  They've been at it since 1926 and they know what they're doing.  Hot dogs are their specialty but their menu also includes  burgers, sandwiches and salad.  They're also known for their breakfast including livermush. 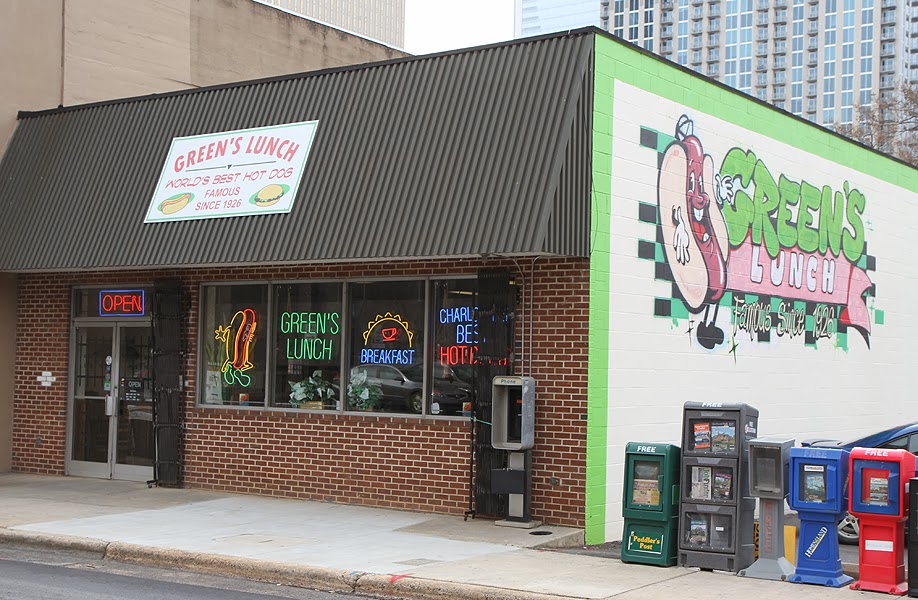 Inside there is not an ounce of pretension.  Blue collar and white collar customers, brought together by their shared love of good food, enjoy lunch side by side.  Order at the counter and within minutes you'll have a mouthful of history. 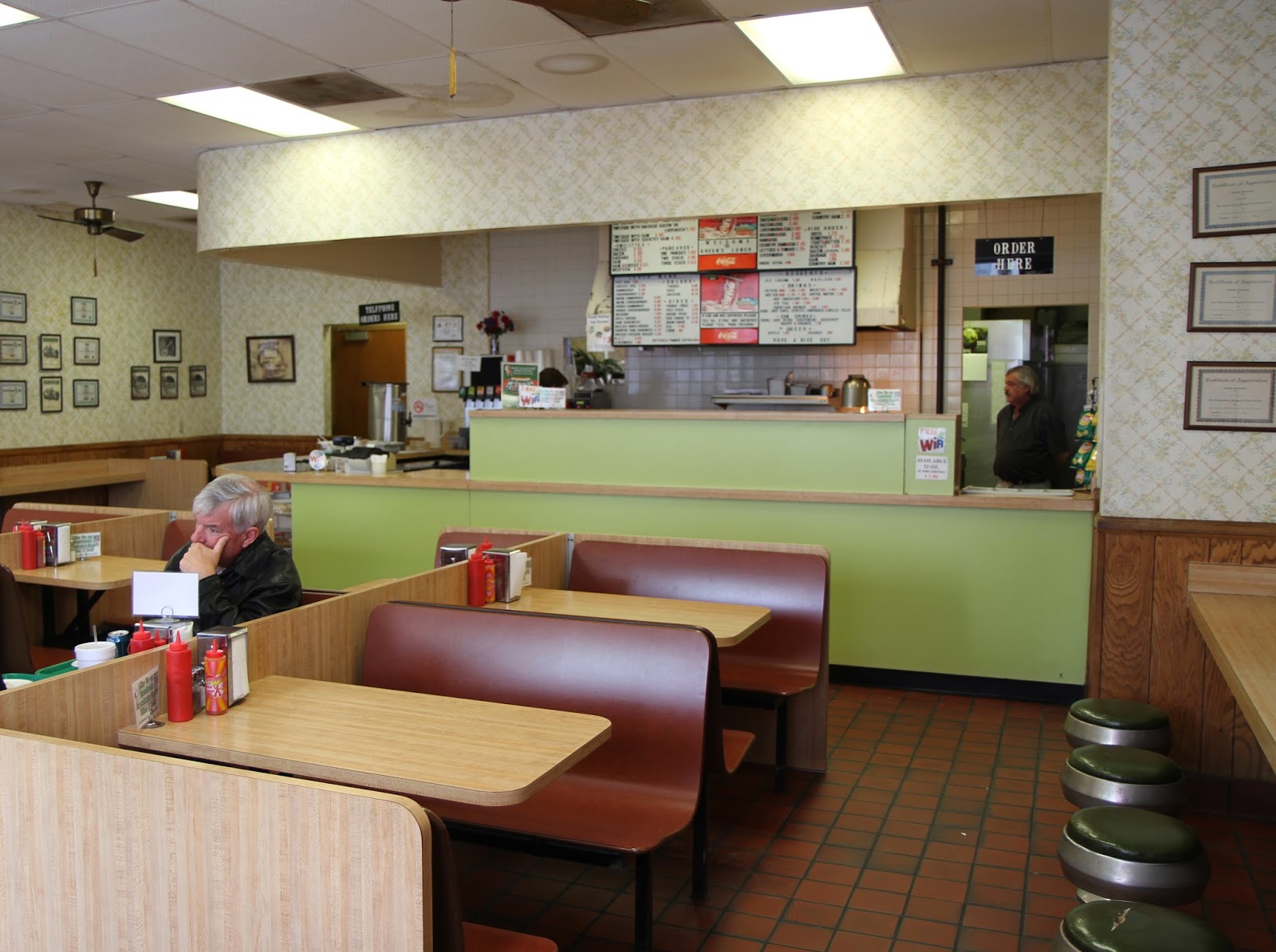 And this is what all the fuss is about:  A couple of Cheese Dogs with the works.  That includes mustard, ketchup, homemade cole slaw, freshly chopped onions (no onions on mine though) and their secret homemade chilli. 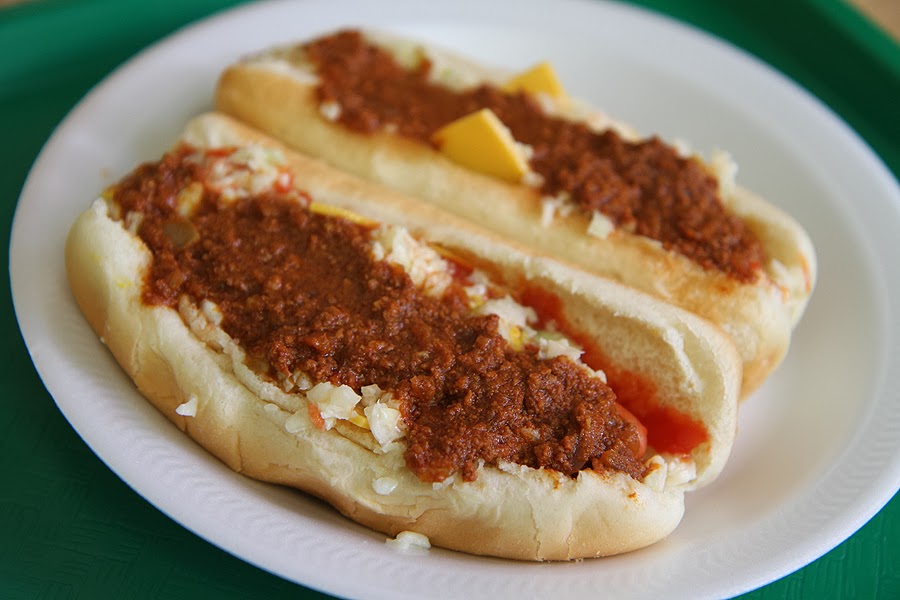 Lunchtime well spent.  Stop by tomorrow for another helping of Charlotte, NC!

Posted by Esteem Education Co. at 11:03 AM No comments:

Stuff We Saw in Charlotte Part 3 - Welcome to the Jungle

Not every day in Charlotte, NC can be 65 degrees and sunny.  Weather, as it does, can and will change and that's what happened to us.  It's the type of thing that changes something like this: 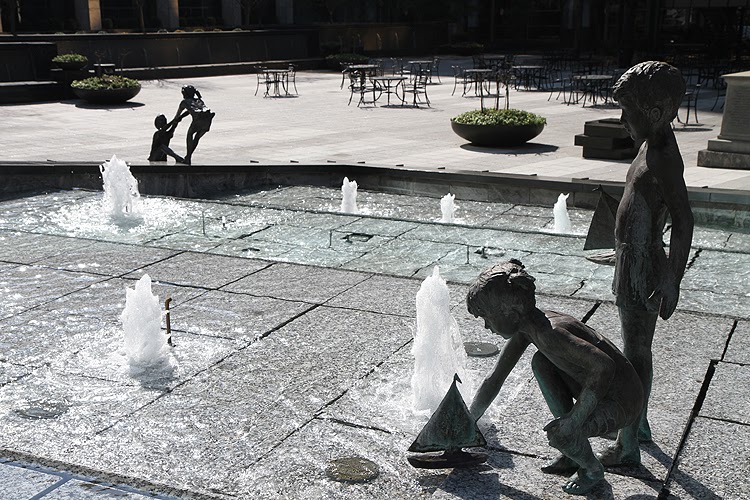 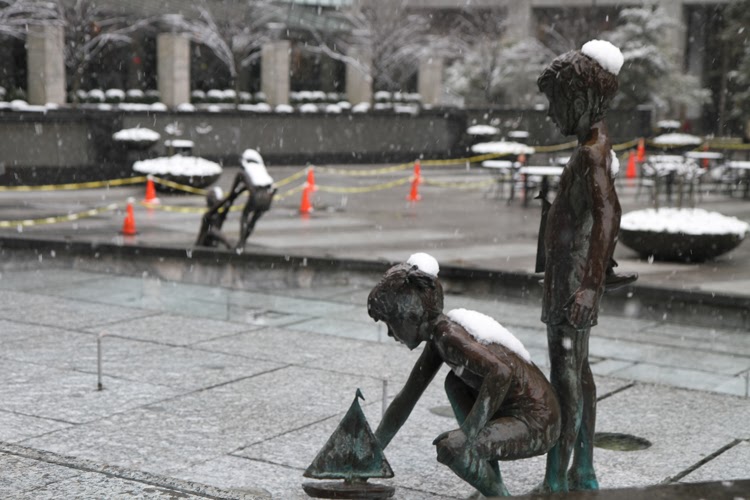 What a difference a day makes.  All this wintery mix made us crave the kind of warmer climates that attract lizards, reptiles, amphibians and bugs of the tropical variety.  They always seem to know the cool places (or rather warm places) to hang out.

Stumbling into the Discovery Place was serendipitous since their handy rainforest exhibit was ready to warm me up.

We were even able to share our weather woes with this slightly out of focus turtle (and his friend).  I'd like to think his name is Jimmy or something similar: 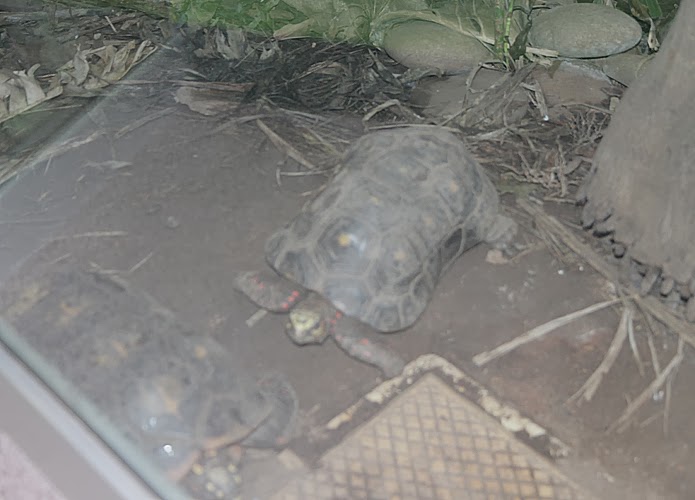 Posted by Esteem Education Co. at 6:19 PM No comments:

Stuff We Saw in Charlotte Part 2 - To Be the Queen

Many people, when asked, think that Charlotte, NC was named after the first famous "Charlotte" that pops into their head.  For example, we initially thought it was named after Charlotte Rae who played Mrs. Garrett on the "Facts of Life."  No so apparently.  Meet the real Charlotte: 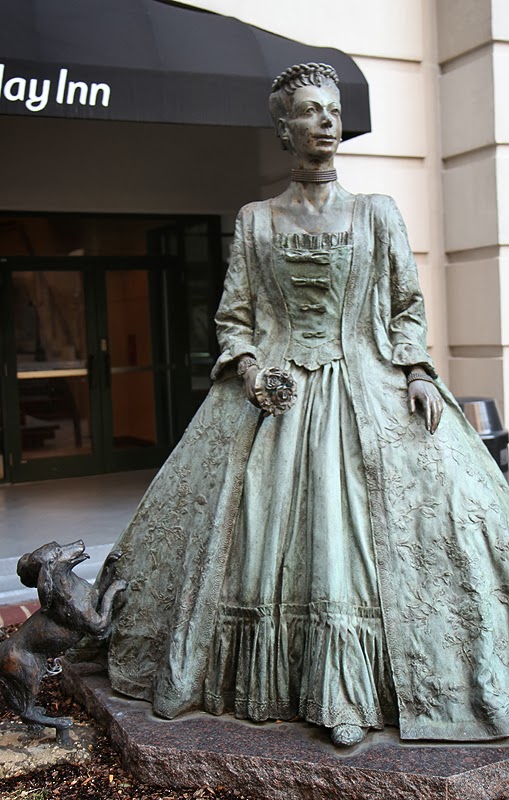 Queen Charlotte of Mecklenburg-Strelitz was married to King George III and was grandmother to the notoriously unamused Queen Victoria (founder of Torchwood).  Historically Americans have had issues with royalty ranging from rebellion against Charlotte's husband King George to delight at the performances of Queen Latifah.

The founders of Charlotte, NC thought they might score some brownie points with the King by naming their town after his main squeeze.  This likeness of her "Easy, Genteel and Agreeable" highness was created by sculptor Graham Weathers and stands outside the The Wake Forest School of Business (and a Holiday Inn): 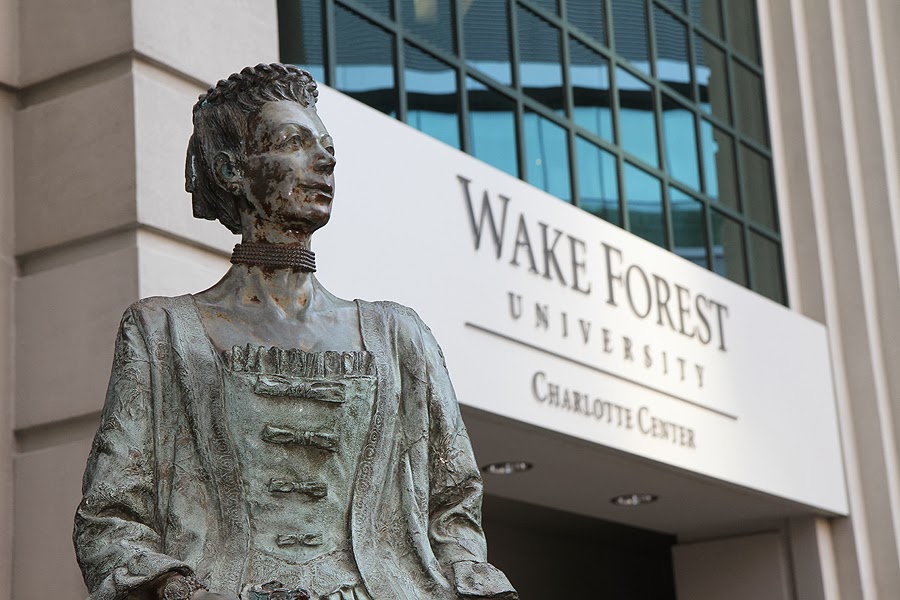 In addition to studying botany and tending her gardens, she was a dog lover and two of her dogs (one of whom was named Presto but don't ask me which) are with immortalized with her: 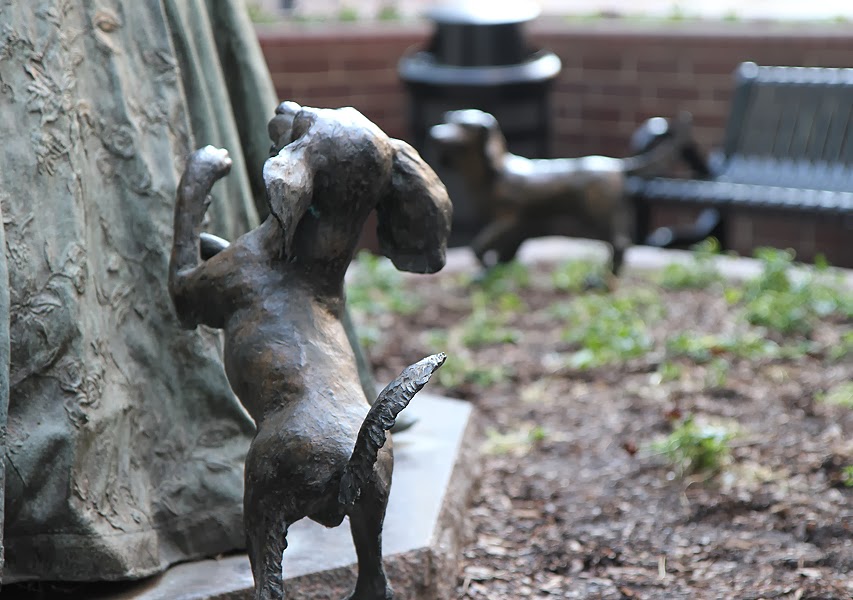 And while we're on the topic of statues that caught our eye, we would be remiss if we didn't mention the city's beloved "Disco Chicken": 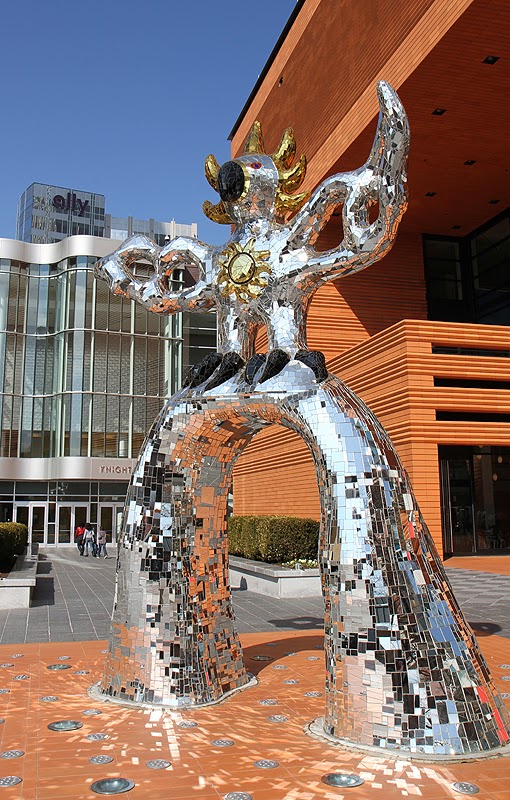 Behold the Disco Chicken in all its glory!  His (or her) official name is the Firebird and he stands watch outside the Bechtler Museum of Modern Art which is pretty close to The Green we mentioned yesterday.  Chicky is about 17 and a half feet tall and was created by artist Niki de Saint Phalle.


Posted by Esteem Education Co. at 7:25 AM No comments:

Stuff We Saw in Charlotte Part 1 - The Green

We find ourselves in Charlotte, NC for the time being and we are taking the opportunity to have a look around.  Our fist stop is a park called "The Green."  And if you weren't in the mood to pick up a good book before you visit, you will be after. 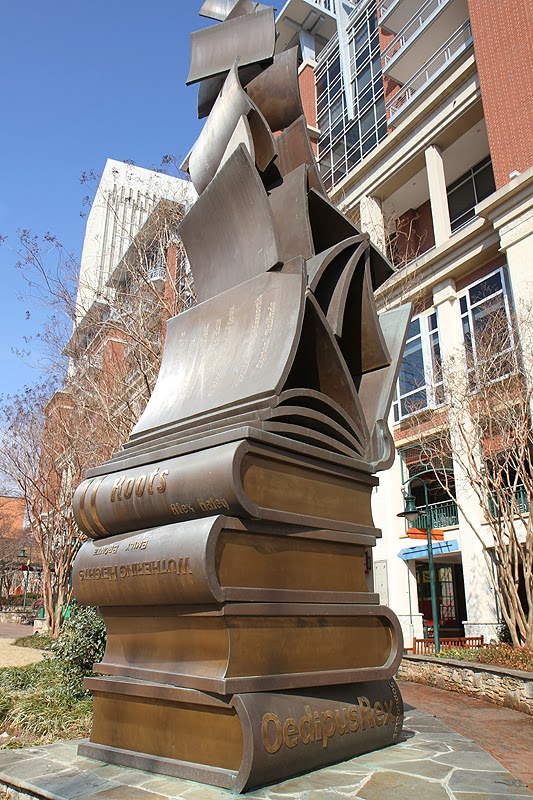 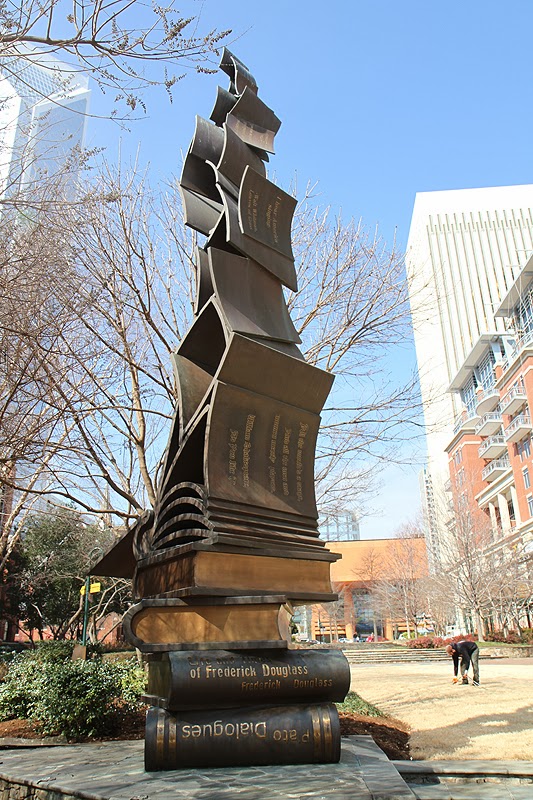 Stacks of bronze classics welcome you at the park's entrance and set the literary mood for your park experience.  The theme continues as you walk the trails reminding you of the works of the greats as well as giving you a some geographical trivia. 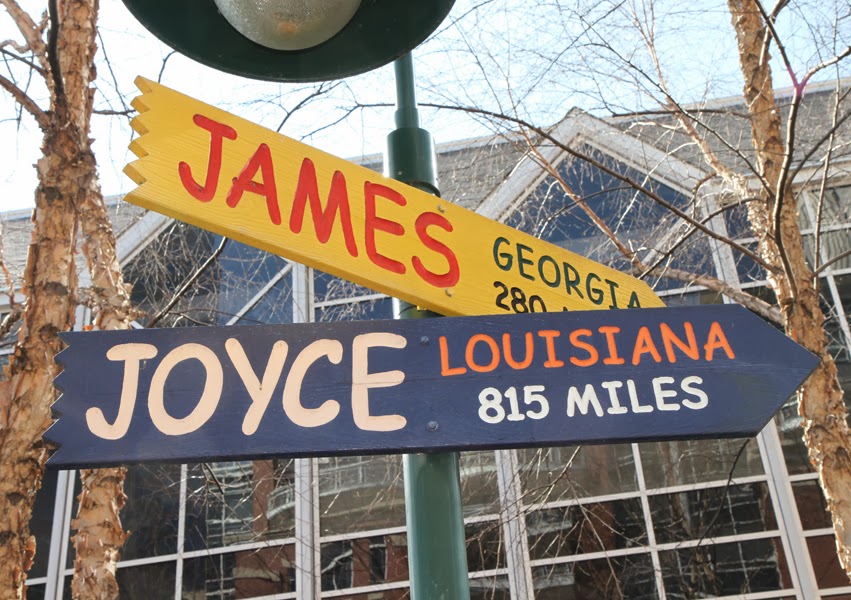 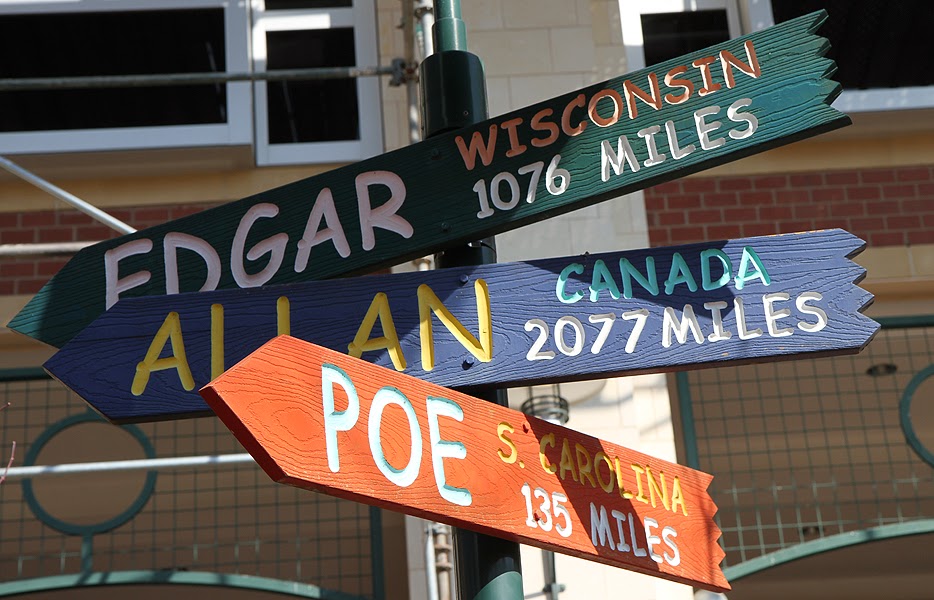 And on one end stands "Brick Kids - Life is an Open Book" as well as the historic Ratcliffe’s Flowers Sign which was moved here from it's original location: 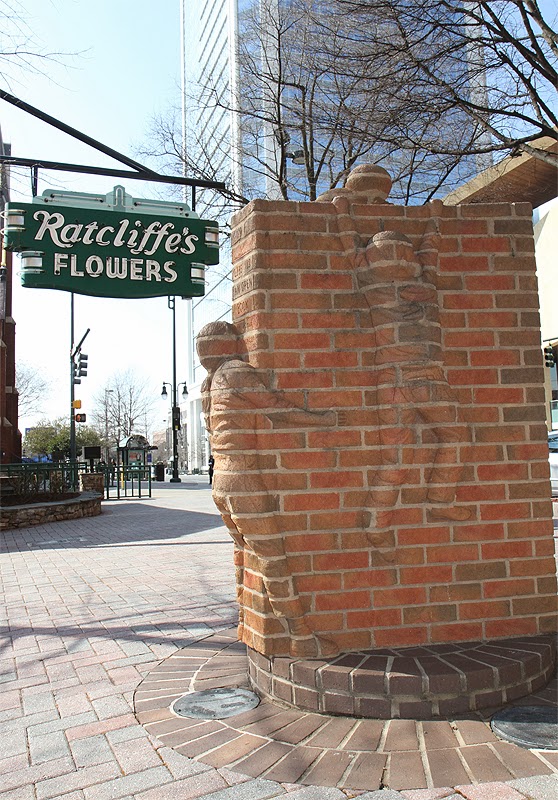 Posted by Esteem Education Co. at 8:03 AM No comments: 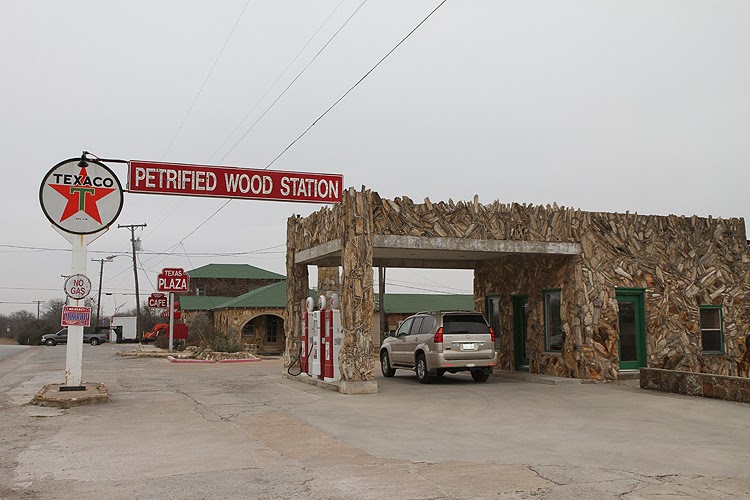 The Petrified Wood Gas Station holds a place in the pantheon of Texas roadside attractions.  It's got the triple threat pedigree that we are always on the lookout for:  Science, History and Culture.  We'll start, as we frequently do, with the historical marker: 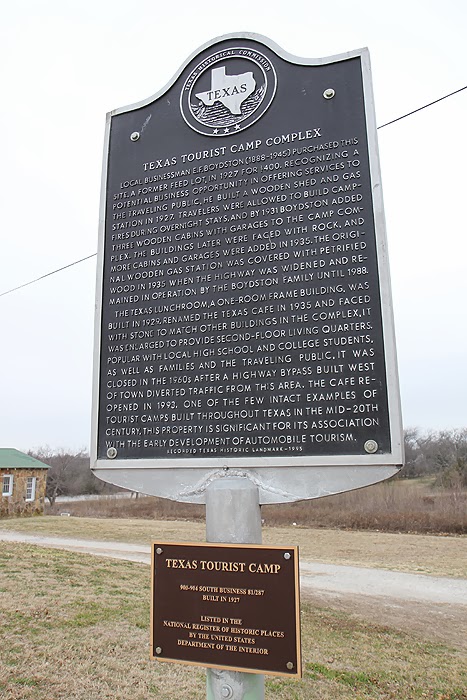 "Local businessman E. F. Boydston (1888-1945) purchased this site, a former feed lot, in 1927 for $400. Recognizing a potential business opportunity in offering services to the traveling public, he built a wooden shed and gas station in 1927. Travelers were allowed to build campfires during overnight stays, and by 1931 Boydston added three wooden cabins with garages to the camp complex. The buildings later were faced with rock, and more cabins and garages were added in 1935. The original wooden gas station was covered with petrified wood in 1935 when the highway was widened and remained in operation by the Boydston family until 1988.
The Texas Lunchroom, a one-room frame building, was built in 1929. Renamed the Texas Cafe in 1935 and faced with stone to match other buildings in the complex, it was enlarged to provide second-floor living quarters. Popular with local high school and college students, as well as families and the traveling public, it was closed in the 1960s after a highway bypass built west of town diverted traffic from this area. The cafe reopened in 1993. One of the few intact examples of tourist camps built throughout Texas in the mid-20th century, this property is significant for its association with the early development of automobile tourism."

And we move on, as we frequently do, to the video.  Devin explains the awesomeness of this location:


Posted by Esteem Education Co. at 5:42 PM No comments: