A Tribute to Big Tex

Today we lost a friend.  Year after year he was always there for us with a smile and a wave.  He was a long lost friend who we found every fall as he welcomed us back to our childhood.  Frivolity and fun were his stock in trade.  He didn't judge and he never demanded.  We all got older and changed but, despite a few new shirts, his spirit remained the same.

Every year, shortly before the State Fair of Texas would begin, he would come back into our lives like clockwork: 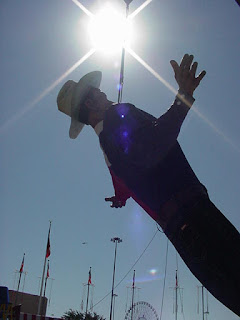 And every year, after the fair concluded, he would return to that fantastical realm populated by his contemporaries Paul Bunyan and Santa Claus.  He found time to become a part of our lives and our culture.  You may remember his appearance in King of the Hill: 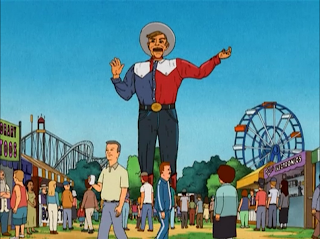 Or in the 1962 film version of Rodgers and Hammerstein's "State Fair":

He even found time to team up with the X-Men to help save the day: 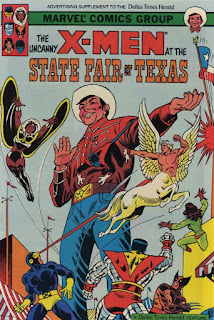 But it was his day to day duties as a goodwill ambassador that earned him a spot in our hearts.  And that's how we'll all remember him.

Next year Big Tex will most certainly be rebuilt, hopefully retaining as much of his original physical structure as possible, but, more importantly, retaining the true heart of a Texan.  After all, he died with his boots on...and that's all any of us can ask.