Another trip to Tyler means another excuse for a new "Marking Time." This time we'll stop by Bergfeld Park. 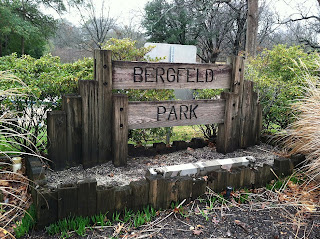 As you probably guessed, Bergfeld Park was named after someone called "Bergfeld." Rudolph Bergfeld, to be exact...and he not only did he get a park named after him but he got his very own historical marker: 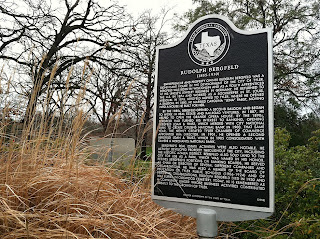 "Entrepreneur and property owner Rudolph Berfeld was a significant figure in the development of the city of Tyler. Bergfeld was born in Wisconsin and as a youth apprenticed at his uncle's jewelry business in Germany. He returned to the U.S. in 1874 and worked as a bookkeeper in St. Louis, Missouri. In 1878, Bergfeld moved to Tyler, where he opened a saloon. In 1880, he married Caroline "Lena" Pabst, moving into a house he built for her.
By the 1880s, Bergfeld opened a second saloon and began to work in real estate and railroad ventures. In 1887, he helped to open the Grande Opera House. By the 1890s, Bergfeld had turned his interest to banking, opening Bergfeld Loan & Trust, which merged with City National Bank to create Citizens National Bank in 1900. That same year, the newly created Tyler Chamber of Commerce appointed him Director. In 1901, he opened a second Bergfeld Loan & Trust, which in 1905 consolidated with Farmers & Merchants National Bank.
Bergfeld's real estate activities were also notable. He actively developed property throughout the city, including the historic Azalea District. Bergfeld also sold land to the city for use as a park, which was named in his honor.
Besides Bergfeld's positions on banking boards, he served as chair or director of several different companies and organizations. He was also a member of the Board of Education of Tyler Public Schools (1906-1924) and of fraternal organizations. Rudolph Bergfeld died in 1930 and was buried in Oakwood Cemetery. Today, he is remembered as a community leader whose business activities contributed greatly to the growth of Tyler. " 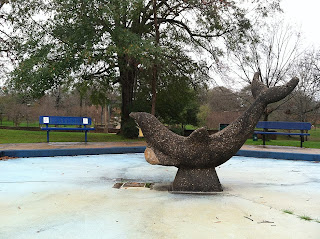 The park is full of neat stuff like this dolphin statue (that I assume is a fountain during warmer weather), a tennis court, an amphitheater that is frequented by the East Texas Symphony Orchestra and, of course, playground equipment: 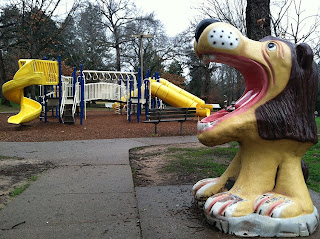 And just like our last Tyler edition of "Marking Time," this place also has a double dose of historical markers: 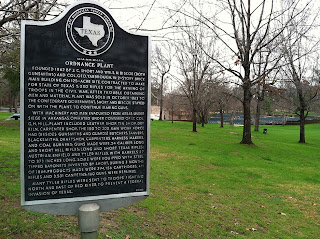 This one recalls an old Confederate weapons factory that was near this location and reads:

Near Site of C.S.A
Ordnance Plant

"Founded 1862 by J.C. Short and WM. S.N. Biscoe (both gunsmiths) and Col. Geo. Yarbrough. In 2-story brick main building, on 125-acre site, contracted to make for state of Texas 5,000 rifles for the arming of troops in the Civil War. After trouble obtaining men and material, plant was sold in October 1863 to the Confederate government. Short and Biscoe stayed on with the plan to continue making guns.
With machinery and men evacuated from areas under siege in Arkansas operated under command of Lt. Col. G.H. Hill. Plant included leather shop, tin shop, dry kiln, carpenter shop. The 150 to 200 man workforce had (besides gunsmiths and guards) butchers, tanners, blacksmiths, draftsmen, carpenters, harness makers and coal burners. Guns made were .45 calibers long and short hill rifles, long and short Texas rifles, Austrian, Enfield and Tyler rifles with barrels 27 to 37 inches long. Some were equipped with steel tipped bayonets invented by Short during 3 months of 1864. Products made were 394,156 cartridges, 411 rifles and 3, canteens. 160 guns were repaired.
Many Tyler rifles were sent to troops fighting North and East of Red River to prevent federal invasion of Texas."

Posted by Explorer Multimedia Inc. at 10:19 AM