Marking Time #17 - The Hippos of Hutto

When you visit the town of Hutto, TX (about 30 miles north of Austin) you can't help but notice the multitude of hippo statues. What gives? Well the town also has a Historic Marker which will hopefully shed some light on the situation. 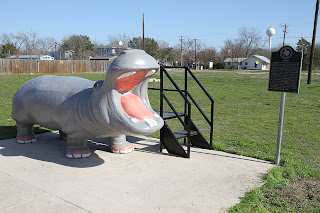 "Located near Shiloh, one of the earliest villages in Williamson County, this area was settled in 1855 by J. E. Hutto (1824-1914) and Adam Orgain, a former slave. Hutto sold land for this townsite to the International & Great Northern Railroad in 1876. A post office was established in 1877 with Hutto as postmaster. By 1882, the town had a school and a Baptist church. By 1898, there were six churches, a Masonic lodge, newspaper, hotel, bank, two gins, and several stores. Hutto grew rapidly after Swedish immigrants turned nearby farms to cotton production. The town was incorporated in 1911." 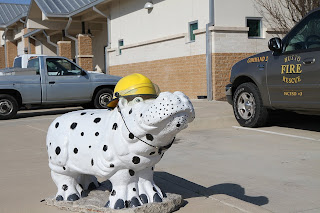 Ok, that really didn't help so here's the short version of the story: in 1915 a hippo escaped from a circus train and went about the business of hippo hi-jinks until the townspeople and animal trainers were finally able to catch him and return him to the train. Ever since then the town has had Hippo Fever! 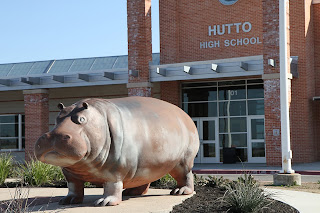 The school even adopted the hippo as the official mascot and the town is riddled with hippo statues. Some say there are hundreds but I don't think anyone has ever done an official count.

Posted by Explorer Multimedia Inc. at 9:34 AM